Diablo Trust is a land management team that was initiated in 1993 by two farming families the Metzgers and the Prossers to provide a forum for the community to actively participate in land stewardship.

The Diablo Trust is an innovative approach to rural planning in Arizona between 1998 and 2000, called the “Growing Smarter Legislation”. Landowners were encouraged to petition for the establishment of Land Trusts that would effectively assume planning responsibility for rural faming lands and adjacent tenures within Arizona. With the approval of the Coconino County Board of Supervisors the Diablo Trust was formed in 2003. Subsequently a planning meeting held at the Flying M Ranch in Fall 2003 and the Diablo Canyon Rural Planning Area (RPA) was formed. It was the first Trust of its kind in Northern Arizona and effectively transferred control of the planning and permitting process for the Diablo Canyon Area to the Diablo Trust.

Their Mission statement is:

The Diablo Trust is a 501(c)(3) land management team created to promote the social, biological and economic sustainability of 426,000 acres of intermingled federal, state, and private lands southeast of Flagstaff, Arizona, by engaging in a collaborative stewardship process that is in harmony with the natural environment and the broader community.

According to their Vision Statement, the Diablo Canyon RPA:

Serves as a model approach for the continuation of traditional working ranches as long-term, economically-viable enterprises while maintaining unfragmented landscapes and restoring native ecosystems.  The RPA successfully integrates economy, ecology, and community by pursuing a range of economic opportunities necessary to support and maintain the viability of ranching while recognizing the fundamental importance of the health of the land and the support of the broader community.

Their goal statement is:

To create a range of economic opportunities in support of private landholders and traditional uses while preserving open spaces for future generations.
The sub-goals are:

The key driver for the formation of the Diablo Canyon RPA was necessity, and fear that the traditional cattle ranches and the families that run them would not survive. They aimed to protect traditional agriculture by preserving farmlands and developing options for value-adding products, tourism and alternative land-uses.  Two families, the Metzgers and the Prossers have ranch properties adjoining Diablo Canyon and they both recognized that they needed to join forces to preserve their land and the traditions connected to those lands. They also recognized the need to communicate with the local community and conservation groups regarding their efforts to preserve grasslands not only for cattle, but also for the wildlife that inhabits the area.

Antelope, elk and deer co-habit with cattle on their properties and they have made considerable effort to protect wildlife habitat by working with the National Resource Conservation Service (NRCS). Besides practical measures such as fencing cattle out of wetlands and using rest-rotation grazing during drought periods, they have also taken some innovative steps to incorporate, collaborate and communicate with the wider community under the banner of the Diablo Canyon RPA. Finally, there was a desire to pass on a viable business operation to future generations of family farmers, which in itself is a key dimension of economic and social sustainability.

Process of Innovation: When and How to Innovate?

There were two steps involved in this innovative approach to saving and sustaining land and traditions in the area. First was establishing the Diablo Trust as the entity that would assume planning responsibility for the area. This was undertaken by the Metzger and Prosser families, owners of the two long-time ranches in the area, the Flying M and the Bar T Bar Ranches. They began a process of petitioning the County Board for approval to form a rural planning area. The second step was to develop the Diablo Regional Plan which would encompass all of the multiple land uses within this area of approximately 426,000 acres. The area was a “checkerboard” of different land uses and private, state and federal tenures, and ranged from forests to high desert country (see figure 1). This area in north-east Arizona is the heartlands of the American West, once characterized by the Ranchers and cowboys who were the stuff of legends and the source of images portrayed through books and movies of the “wild west”.

Now, there are many competing lands uses and the process of planning and managing the land involved many stakeholders, as well as integration with the County Comprehensive Plan. There was a need to educate the public of the importance of public land ranching and the environmental stewardship practices that ranchers had in place. A weekend workshop was the venue for the ranches to recruit new members of the trust, such as the Sierra Club (and American environmental organization), who were not aware of the ranchers’ efforts with regard to land management and preservation. 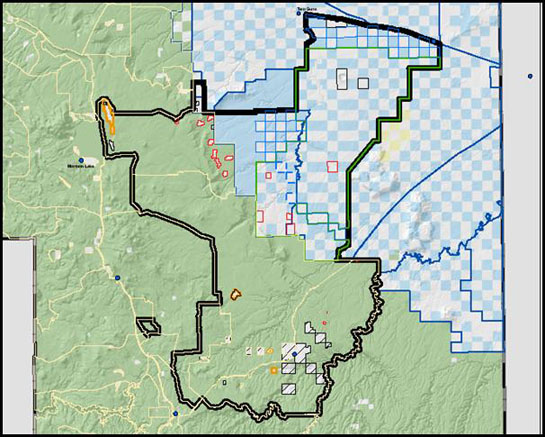 With regard to commercial operations, a variety of land use options were considered worthy for inclusion in the Diablo Regional Plan. All the options had a commercial focus and some had additional environmental benefits and included:

Examples of each of these options are cited in the plan and include fresh or frozen beef products, “dude ranches” and other tourism, recreation and education opportunities, firewood products, wind power generation and housing development.  However, each option presented their own challenges and barriers that limit their economic viability and/or cultural desirability.  These will be discussed in the next section.

There were many barriers for these farming families, not the least of which was the global trend toward intensive farming of beef in feedlots leading to the failure of traditional farming methods such as cattle ranching.  Another less tangible barrier was the perception held by members of the Diablo Trust that “they could do anything” on their lands, which turned out not to be the case.

The production of high quality, natural or organic beef for niche markets had been done in other parts of the West, and three examples — Babbitt Ranches, Oregon Country Beef and Ervin’s Natural Beef — were cited. A key decision is whether to provide the beef product in fresh or frozen form. Getting these products to market would require considerable investment in infrastructure and distribution systems which presented a major financial barrier.

Tourism, recreation and education also presented many barriers. Hosting and accommodating visitors on the ranches would require a huge effort by farmers, who are already busy with their farming activities. Other on-farm activities involving recreation and education programs were also considered, but their small scale meant that they may not be commercially viable. The cost associated with public liability insurance is also a major barrier to entry into this form of tourism, especially if an authentic experience of ranching and all of the hazards associated with it are to be offered. Finally, the presentation and communication skills of the local workers who would work in tourism are also a constraint.

Wood product production was considered as an innovation that would address two issues. Firstly it would reduce the area of Juniper and Pinion trees, making more land available for grazing. Juniper was an invasive species that was destroying grasslands and a program of reduction was already in place. Secondly it provides a source of commercial firewood production to meet demand in the cold Northern Arizona winters. However, tree-clearing and firewood collection is highly labour-intensive and there are many other sources of fuel for home log-fires, including packaged, manufactured logs with guaranteed three-hour burn times and even with crackling that imitates the sound of real burning wood!

Commercial banks of wind turbines that generate power for the grid can be found on many farming lands, and the rent that these sites generate for land owners is substantial. However, they have a tendency to ruin the rural vistas and aesthetics and as such meet with considerable resistance whenever they are proposed in open landscapes. View sheds in Northern Arizona can extend for 60 miles or more and in themselves provide a great sense of space for the millions of tourists that view the area on the way to world-class attractions such as the Grand Canyon and Monument Valley.  Locating Wind Turbines on farms requires consideration of not only engineering factors such as proximity to the grid, but also aesthetic considerations and effects on vistas and view sheds.

Finally, housing development perhaps presents that biggest issue for farmers, as land sold off for housing will be lost to farming forever. All farmers, no matter where they live, want to retain or indeed expand their land holdings in order to attain economies of scale and more economically viable farm production.  Partial sale of farmlands would however enable farmers to keep their Ranch houses and the majority of their lands, so a careful plan for developing land has to be put in place.

The Diablo Trust arose for a single purpose, to protect traditional farming families, so was not really involved with other groups. In fact it was described as an “accidental organization” that had to embrace all land management issues in the area, taking it well beyond it’s original task. Having established the Trust, they then began the process of engagement with other groups such as tourism, whom they originally viewed with caution. Developers too were viewed with suspicion, but bringing these groups together around the table was critical to developing the Diablo Regional Plan. Rather than “supping with the devil” this engagement with all other land users was considered as “embracing thine enemy” and a way for openly considering all options for protecting and preserving the farming lands. The Diablo Trust considers the engagement with land developers to be one of the most constructive outcomes of the planning process.

Innovation can be both necessary and practical and will not always require extensive research and new technology, especially when it comes to dealing with the universal problems of rural land management. By working with local, state and federal agencies, community and conservation groups and each other, these two long-time farming families have taken considerable steps to improve land management practices, conserve habitat for wildlife, maintain their farming traditions and ensure that the land remains representative of all of the values associated with the West.

This case study is one out of three on Innovation for Sustainable Tourism.A later version of the case study has been published in book form.